By Vanessa Fuhrman writing or The Wall Street Journal 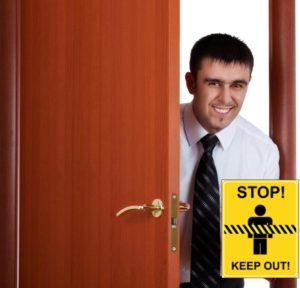 America’s most coveted workplace item? A door to slam in co-workers’ faces! The Journal’s Vanessa Fuhrmans reported last week that executives are tired of the egalitarian, open-floor planning craze, in which they are forced to share desk space, lunchtime aromas and even conversations with low-ranking employees, and are demanding a return to the era of private offices, where today’s workplace leaders will be able to shut the door and save the company in blissful, creative silence. Or, nap.

Critics claim open floor-planning hasn’t been the innovation-booster it was sold to be—all that insidious mingling instead led to distractions and low productivity, not to mention insufferable small talk about CrossFit. The plea for private offices follows the backtracking of another modern workplace standard: remote employees. Just recently,IBM boss Ginni Rometty blew on the corporate conch shell and called the company’s thousands of remote workers back to the reef. The idea, IBM explained, is to bring all that talent together and build a collaborative workplace where innovation happens—at least until everyone gets sick of it, and demands private offices.

As someone who has worked remotely, and also at a desk, a cubicle, and, glamorously, an office with a window that looked directly into the window of the office bathroom, I see all sides here. To be honest, I’m perfectly capable of screwing around and not doing my work while sitting at home, elbow-to-elbow with my colleagues, or behind a hermetically sealed door. I have days working at home when noon rolls around, and I have to remind myself I haven’t put on pants. There are also days in the office I would do anything not to put on pants.

But if we’re really turning back the clock here, to the retro American office environment, where status was conferred by getting your name etched on a door, and “remote worker” was just another term for “semi-employed,” we should be demanding a few more things:

(If you’re a CEO, think about all the gloomy emails you have to send these days, telling workers about downsizing and budget reductions and how this year’s holiday party will not take place at Applebee’s, but in a parking lot behind the Applebee’s. Now imagine what it will be like to send out an email about the return of the bar cart, what a hero you will be in the office… for at least a couple hours, until everyone starts talking behind your back again. Do it!)

I also remember offices with smoking rooms, and how those smoking rooms became, in effect, influential secret societies, with their own rules and gossip and even marriages. Employees took up smoking just so they could hang out in the smoking room. Talk about the collaborative spirit! Yes, there are some health concerns, but those blueberry scones in the morning meeting aren’t going to lengthen your life, either.