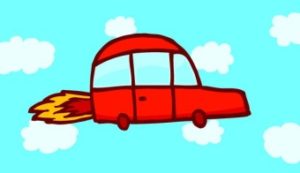 SAN FRANCISCO — So here’s just how fast technology is accelerating. We haven’t even nailed down self-driving cars yet, and now the buzz is all about flying cars.

In fact, the dogged pursuit of an airborne escape from traffic has been with us for more than half a century, from the limited-edition Aerocar of the 1950s to the host of contemporary companies now taking pre-orders for their airborne vehicles.

Dutch startup PAL-V announced last week that it was taking $10,000 deposits for its $400,000-and-up two seat Liberty flying car, while Slovakia-based AeroMobil began doing the same for its $1 million-plus machine due out in three years. Both models would require a runway and a pilot’s license.

Other big players include Massachusetts-based Terrafugia, whose XF-T looks like a car with wings folded by its sides and, notably, can take off and land vertically, using so-called VTOL technology. The company’s site claims flying an XF-T won’t require a full pilot’s license.