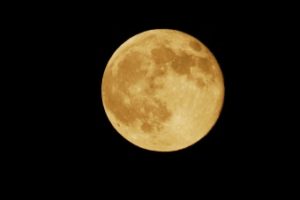 The year is set to close with the biggest moon that most people alive will ever have seen.

The satellite is set to get closer – an so brighter and bigger – than it has for almost 70 years on 14 November.

A supermoon happens because of the strange, egg-shaped orbit of the moon. One part of the orbit known as the perigee, is about 30,000 miles closer to earth than the apogee, or the furthest part.

And if the orbit of the moon lines up right with the sun and the Earth, it causes an effect called perigee-syzygy – meaning that the moon appears far bigger in the sky and gets called a supermoon.