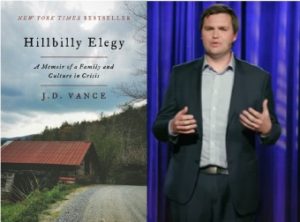 J.D. Vance, the Middletown native who turned the story of his turbulent childhood and family dysfunction into a best-selling book, was near emotional collapse when his path out of the rust belt took him to Yale Law School, he said during a television interview broadcast over the weekend.

“I was … as close to a nervous breakdown as I’ve ever had, just the stress of law school, mom had just had a heroin overdose, I was in love with this girl, Usha, but I didn’t quite know how to be in love with her in the way that I wanted to be,” Vance said on NBC News’ Sunday Night with Megyn Kelly.

Vance’s book, “Hillbilly Elegy: A Memoir of a Family and Culture in Crisis,” chronicles the hard-luck history of his white working class family from Kentucky to Ohio.