By BY MEGAN SPECIA writing for Mashable.com 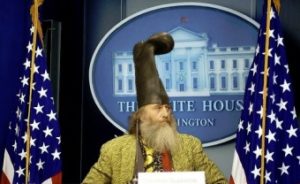 He also just placed fourth in the New Hampshire Democratic primary Supreme, who carried a 3-foot-tall toothbrush with him as he canvassed the state, managed to pull in 260 votes from New Hampshire residents on Tuesday, according to official primary results.

That’s nearly double the support that Republican contender and former Virginia Gov. Jim Gilmore, who is still actively campaigning, saw in the state.