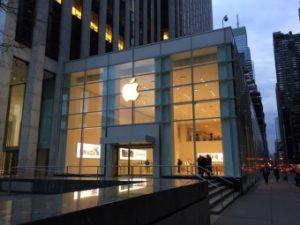 We learned earlier this month that Apple would be temporarily relocating its iconic glass cube store on New York’s Fifth Avenue in order to carry out refurbishments. The temporary store is now open, and we’ve now be able to see what the interior looks like.

Pingie has a set of photos showing the rather less glamorous exterior and a somewhat more basic interior, with an unfinished concrete floor.

The temporary store is right next door to the permanent one, and was formerly occupied by toy retailer FAO Schwarz. There had initially been some suggestion that Apple had been planning a permanent expansion into these same premises, but it was apparently deterred by the high rent being sought.