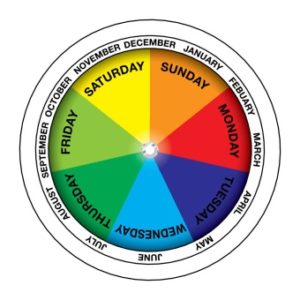 The original Roman year had 10 named months Martius “March”, Aprilis “April”, Maius “May”, Junius “June”, Quintilis “July”, Sextilis “August”, September “September”, October “October”, November “November”, December “December”, and probably two unnamed months in the dead of winter when not much happened in agriculture. The year began with Martius “March”. Numa Pompilius, the second king of Rome circa 700 BC, added the two months Januarius “January” and Februarius “February”. He also moved the beginning of the year from Marius to Januarius and changed the number of days in several months to be odd, a lucky number. After Februarius there was occasionally an additional month of Intercalaris “intercalendar”. This is the origin of the leap-year day being in February. In 46 BC, Julius Caesar reformed the Roman calendar (hence the Julian calendar) changing the number of days in many months and removing Intercalaris.