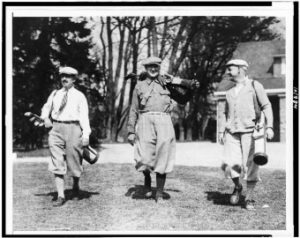 The birth of golf.

Golf as we know it today originated from a game played on the eastern coast of Scotland in the Kingdom of Fife during the 15th century. Players would hit a pebble around a natural course of sand dunes, rabbit runs and tracks using a stick or primitive club.

Some historians believe that Kolven from Holland and Chole from Belgium influenced the game. The latter was introduced into Scotland in 1421. However, while these games and countless others are stick and ball games, they are missing that vital ingredient that is unique to golf – the hole. Whatever the argument, there can be no dispute that Scotland gave birth to the game we know as golf today.