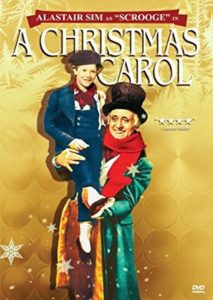 In recent weeks ghosts, dozens – maybe even thousands – of them, have been appearing in my front room.

I have, you see, been watching the many film versions there have been of the Charles Dickens classic in an endeavour to find the best movie adaptation of A Christmas Carol.

Every year, around early December, I prepare myself for my Dickens Christmas Walk by both reading the book and watching the film.

The film version I have always watched is the 1951 adaptation starring Alastair Sim, largely because a) I consider it the finest version ever made and b) because it brings back happy childhood memories, of when it was always on TV.

However, in 2013, I was asked to appear as an interviewee on Channel Five’sGreatest Christmas Movies Ever to talk about various film versions of A Christmas Carol. As it happened, they didn’t want me to speak about the Alastair Sim version but rather The Muppet Christmas Carol and Bill Murray’s Scrooged, neither of which, I am ashamed to say, I had actually seen.

But, a quick visit (or should that be click) to Amazon and, a day later, the DVD’s of both appeared before me and I spent the next two days watching them.