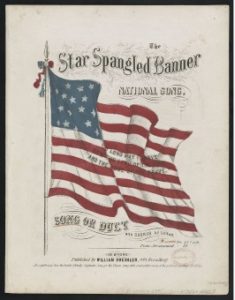 By the dawn’s early light on September 14, 1814, Francis Scott Key peered through a spyglass and spotted an American flag still waving over Baltimore’s Fort McHenry after a fierce night of British bombardment. In a patriotic fervor, the man called “Frank” Key by family and friends penned the words to “The Star-Spangled Banner.” Two hundred years later, learn nine surprising facts about the national anthem of the United States and the man who wrote its lyrics.

1. Francis Scott Key intended his verses to be song lyrics, not poetry.
“The Star Spangled-Banner” was not a poem set to a melody years later. Although Key was an amateur poet and not a songwriter, when he composed his verses, he intended them to accompany a popular song of the day. “We know he had the tune in mind because the rhyme and meter exactly fit it,” says Marc Leepson, author of the new Key biography “What So Proudly We Hailed.” The first broadside of the verses, printed just days after the battle, noted that the words should be sung to the melody of “To Anacreon in Heaven.” Key was quite familiar with the tune, having used it to accompany an 1805 poem, which included a reference to a “star-spangled flag,” he had written to honor Barbary War naval heroes Stephen Decatur and Charles Stewart.