The Erie Canal is a canal in New York that is part of the east–west, cross-state route of the New York State Canal System (formerly known as the 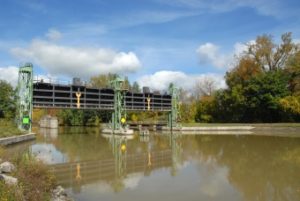 New York State Barge Canal). Originally, it ran about 363 miles (584 km) from Albany, on the Hudson River, to Buffalo, at Lake Erie. It was built to create a navigable water route from New York City and the Atlantic Ocean to the Great Lakes.

By Eric Meier, writing for Lite 98.7, has put together a list of 5 things you might not have know about this technological marvel.

The Erie Canal is the historic waterway that flows from the Hudson River at Albany to Lake Erie at Buffalo. When it was first dug in the 1820s, it cut shipping time and costs dramatically when transporting Midwestern commodities to markets in the East. The canal also gave rise to New York State’s position as the Empire State. Here are 5 things you might not have known about the Erie Canal.