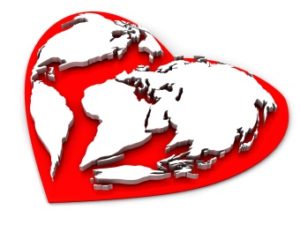 With Valentine’s Day just around the corner, stores are flooded with candy hearts, chocolates and stuffed animals. In the U.S., shelves brimming with teddy bears and boxes of chocolate are typical Valentine’s Day fare, but not every country turns to greeting cards and heart-shaped candies to declare love. Some exchange wooden spoons and pressed flowers, while others hold a special holiday for the loveless to mourn their single lives over black noodles. Here is a look at how 10 countries celebrate Valentine’s Day traditions all around the world.

Although Valentine’s Day is a relatively new holiday in Denmark (celebrated since the early 1990s according to the Ministry of Foreign Affairs of Denmark), the country has embraced February 14th with a Danish twist. Rather than roses, friends and sweethearts exchange pressed white flowers called snowdrops.

Another popular Danish Valentine’s Day tradition is the exchange of “lover’s cards.” While lover’s cards were originally transparent cards which showed a picture of the card giver presenting a gift to his sweetheart, the term is now synonymous with any card exchanged on Valentine’s Day.

On February 14th, men also give women gaekkebrev, a “joking letter” consisting of a funny poem or rhyme written on intricately cut paper and signed only with anonymous dots. If a woman who receives the gaekkebrev can correctly guess the sender, she earns herself an Easter egg later that year.