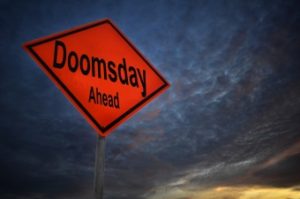 Religious leaders, scientists, and even a hen (or so it seemed) have been making predictions for the end of the world almost as long as the world has been around. They’ve predicted the destruction of the world through floods, fires, and comets—luckily for us, none of it has come to pass.

December 21, 2012, marked the end of the first “Great Cycle” of the Maya Long Count calendar. Many misinterpreted this to mean an absolute end to the calendar, which tracked time continuously from a date 5,125 years earlier, and doomsday predictions emerged. End-of-the-world scenarios included the Earth colliding with an imaginary planet called Nibiru, giant solar flares, a planetary alignment that would cause massive tidal catastrophes, and a realignment of Earth’s axis. Preparations for the end of the world as we know it included a modern-day Noah’s ark built by a man in China and extensive sales of survival kits.